As promised by myself and foretold by my friend, bandmate, and player in the campaign Carter over at his blog, I will now relate the events of yesterday's session involving the nuclear missile. 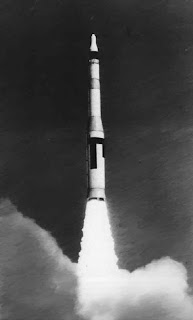 When I started doing research into what exactly would happen if a nuclear missile was knocked off of its launch pad at the moment of launch, I realized that by describing it caroming around the launch chamber I had thrown science out the window.  What would have/should have happened was that the rocket would have exploded in a conventional explosion, either when the explosives detonated or when the rocket slammed into the ceiling.  There are three stages filled with rocket fuel in an ICBM like the Minuteman III that my players were dealing with, and they are not designed to withstand either an explosion or an impact with a concrete wall.

That being said, I had already goofed up and so I rolled with it.  The next most dramatic thing that I could think of was to allow the players to try to disarm the rocket after it had launched.  I did discover in my research that it is next to impossible to accidentally detonate the nuclear warheads carried by such a rocket; in fact, I found an account of exactly what happened when one of these bad boys exploded inside the silo and the warheads were hurled hundreds of feet by the blast without going off.  Of course, my players probably did not know that and their characters certainly would not have, so it was no surprise to me that several of the players jumped down on top of the rocket and started trying to cut into it with their vibra-knifes.  I took this opportunity to have the rocket bounce back into the launch shaft and take off out of the silo, picking up Bozko the mutant plant who had been waiting in the form of a net of vines over the opening of the silo above. 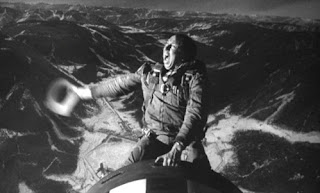 What ensued was a wild and wacky ride on the missile.  If Bozko had not slid down and altered his form to become a giant fibrous safety belt strapping Dataan the robot and Logan the amazing teleporting shrinking man onto the rocket, they would certainly have stood no chance of hanging on... a Minuteman III ICBM can reach up to 15,000 MPH at top speed!  In the minute or so that it took them to cut off the shroud that covers the warheads, they were hundreds of miles away and had left the breathable atmosphere behind, prompting Logan to teleport away leaving Bozko and Dataan (neither of whom need to breath oxygen) to their work.  Without the aerodynamic shroud in place, the top of the missile began to deform and bulge outward even in the super thin atmosphere that they were hurtling through, and this made it easier to separate the warheads from the missile and drop them out over the desert of northern Oregon/Southeast Washington.  Dataan and Bozko glided over as far as they could from their impressive elevation of nearly 90 miles, but still ended up well over a hundred miles from where they began.

The rest of the session was a lot of fun, and while I do not want to go into a blow by blow report here, one other event deserves mentioning.  Toward the end of the session, Dataan was frantically trying to hack into the defense network of the silo complex while its power was still down (the complex, operating on back up power generated by solar panels, had run out of juice in the missile launch operation).  The party was generating power by using the light focusing abilities of Millard Fillmore (a mutant human, not the 13th president of the U.S. despite his player's frequent claims to the contrary) and a solar panel and routing it to the control room while leaving the rest of the complex without power.  Logan, having just finished transporting the remains of the "iron man" suit (some powered armor worn by the deceased Richard Tater of the Knights of Genetic Purity) to the cave that the party was using as a base, declared that he would teleport next to Dataan and Millard "just in case something bad happens".  He appears, newly acquired plasma pistols (also courtesy of Richard Tater) at the ready, just as Dataan rolls a near critical failure on his tech roll to hack into the computer network.  The computer locked Dataan out and alerted the only robotic defender in the area, a "jumping jack" (soon to be detailed in an upcoming post) posted by the front door, a mere fifty feet away from the control room.  It came spinning and bouncing down the spiral staircase and I called for an initiative roll.  Dataan and Millard rolled very poorly (which only made sense, as they had been immersed in their respective tasks, Dataan connected to the computer and Millard focusing light into the solar panel) while the newly arrived Logan got the jump on the jumping jack.  He blasted three direct hits and rolled well enough on the damage that if I failed all three savings throws the jumping jack would die without taking an action.  I rolled my first d20... and got a 5.  Failed save vs. energy attacks, full damage from the first blast.  Second d20... also a 5.  Third d20... another 5!  A 1 in 8000 occurrence, three straight fives on a d20, and the party was saved from a potentially deadly encounter as the jumping jacks are quite a handful.  Working until dawn, Dataan got one more tech roll and this time pulled out a brilliant success, taking full control of the computer systems and enabling the party to fulfill their promise to the desert tribes of restoring access to the great god Intur Netz.
Posted by Unknown at 5:14 PM