I mentioned in my last post that when the choking alien atmosphere was filling the complex, only robots and alien creatures were moving around.  Here are two of the alien creatures the party encountered.  Please check out this amazing series of posts at rpg.net by DMH, he created the Hell Slug and has made literally hundreds if not thousands of creatures for Mutant Future!  Thanks, DMH! 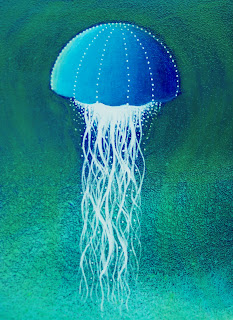 These floating monstrosities are native to the homeworld of the Oozyxphg.  Gas Jellies resemble the jelly fish of earth, but are filled with buoyant gases which enable them to float in the air.  They direct themselves with jet blasts squeezed from special cavities that ring their body. They are capable of generating intense electrical pulses that are transmitted through their tendrils to shock and stun unsuspecting prey.  Gas Jellies spend much of their time in a dormant state, nearly invisible in the thick atmosphere, drifting along dangling their 50' long tendrils just above the ground.  When aroused by the presence of prey (they can sense electromagnetic fields) bright green and blue lights course through the center of their body, indicating the build up of electric charge.  Like many other creatures from their planet the Gas Jellies reproduce asexually, splitting into two smaller Jellies when they reach the upper limit of their size.  They are solitary hunters but on occasion congregate together in great numbers to exchange eerily beautiful displays of rippling light.  Despite their potentially lethal tentacles, the most dangerous thing about a Gas Jelly is the tremendous explosion that can result from overheating their hydrogen filled body.

Attacks: 1/2 the total number of remaining tendrils (rounded up) may attack in any given round.

Damage: 1d10 electrical shock damage and if three or more tendrils hit a single target in a round, the target is grappled and takes automatic damage from each grappling tendril until a strength check at a -2 penalty is made to escape or the grappling tendrils are destroyed.  During the duration of the grapple the Gas Jelly gets +2 to hit the grappled character and each subsequent tendril that hits is considered to be grappling the character as well for purposes of automatic grappling damage in subsequent rounds.

Special:  The Gas Jelly's body is 30' in diameter and is mostly filled with hydrogen.  Every time the body is hit with a laser, fire, bullet, plasma blast, or any other form of attack that might cause it to explode, there is a 15% chance of a massive explosion resulting.  If the Gas Jelly is killed with such an attack, the chance of explosion rises to 50%.  Those within 60' of the explosion take 20d6 damage, between 60' and 100' take 15d6 damage, between 100' and 300' take 10d6 damage, and within 300' to 1000' take 5d6 damage from the force of the blast - a save vs. Energy Attacks halves this damage.  Every time a Gas Jelly consumes a creature of medium size, it gains 1d8 HP (1d4 for a creature of small size or 1d12 for a creature of large size).  When the Gas Jelly reaches 80 HP it fissions into two 40 HP Gas Jellies which go their separate ways.


Hell Slug (created by DMH and posted at rpg.net; my presentation of this creature here is merely in the interest of illustrating the monsters that the party found lurking in the alien mist, and is not in any way a challenge to DMH's ownership of the rights to said monster.  I will remove it at the author's request)

Made of strange muscle fibers, hell slugs are aliens (it is not know if they are from another planet or universe). The slug is 2' long and very fast for its size. It uses 4 tentacles on its head to rip and crush prey. The name comes from its defensive ability- a 10' diameter cloud of acid that inflicts 3d6 points of damage per round. As the slug travels, it leaves a melted landscape behind.

The party has encountered three gas jellies.  The first time they just saw barely visible tentacles dangling through the mist and the dim outline of a huge shape floating above... and they ran.

The next time they ran into one of these guys, it was at the tail end of a long session of exploration in the complex that had not involved any combat.  Dataan the robot was feeling ornery and, despite being a complete coward in most situations, decided that he felt safe enough blowing the thing up from a distance and tried out his new plasma rifle on it.  I described the giant gaseous body expanding with each blast, and mentioned how the area that got hit glowed as if superheated before slowly cooling after each shot.  He got extremely lucky and killed the thing without setting of an explosion and never picked up on my warnings.

This may have contributed to what happened the following session, when Danny (who is now playing Logan the teleporting shrinking man) was playing a character named Rhaco who could fly at a ridiculous speed.  He was zooming through the mists in the wide open hangar level, scouting around looking for any vehicles that did not seem too badly damaged.  He literally flew straight into a gas jelly and in the ensuing tussle he blasted it with a plasma rifle one too many times (again ignoring the ominous warning signs that I was making sure to give him with each shot).  It blew up in his face, and he barely survived after making his save.  The explosion also caught several other party members in its blast radius, and the damage that Ramses the goat headed man took led to his death later that session (along with Rhaco, may they rest in pieces... tiny, tiny pieces, thanks to a grenade lobbed by a Deathbot, coming soon to a Bestiary post near you!).
Posted by Unknown at 11:07 PM