Here are a couple of the robotic guardians the party ran into in the ancient military complex.  After hacking into the defense network, the party successfully reprogrammed several Spiderbots to follow their commands and have used them to great effect in subsequent adventures.  The Scorpion provided the first two character deaths in my campaign, as well as polishing off three NPCs. 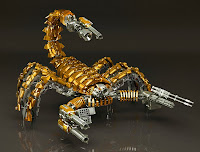 An early attempt at military robotics, the MR7000's rolled off the production lines before the force-field generating tissue utilized by the Oozyxphg was fully understood and cultivated.  As a result, the Scorpions are relatively easy to destroy (compared to the later military robots), but the considerable firepower they pack make them a deadly adversary.  Coupled with a few Spiderbots (see below) to assist with targeting, these bad boys could be your party's worst nightmare.  The body measures 3' long, with a 3 1/2' leg span.  The Scorpion has a very limited artificial intelligence and cameras and microphones in its head are its only sensory inputs.
HP:60   (10 HD)
AC: 5

If a single Spiderbot is assisting the Scorpion with targeting, the Scorpion may use two of its attack options in a single round (as long as they are on different appendages - left claw and right claw, or either claw and stinger).

If two or more Spiderbots are assisting with targeting, the Scorpion may use three of its attack options as long as they are on different appendages (stinger, left claw and right claw).

If the Scorpion chooses to use only a single attack option while one or more Spiderbots are assisting with targeting, the Scorpion gets a +2 to all attack rolls for each assisting Spiderbot up to a +6 bonus.

When a Scorpion is destroyed by gunfire or explosion, there is a 30% chance that any remaining grenades or missiles will explode (for their regular damage and radius of explosion). 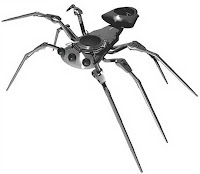 The first real success in reverse engineering Oozyxphigian technology, the Spiderbots were essentially copied whole cloth from the small robots that emerged from the Oozies' powered suits.  Some alien materials could not be duplicated on Earth, so the MR9000 is slightly weaker than the real deal, but they still represent the first military use of force-field generating tissue.  The military recognized the potential in the organic computers used by the Oozies and cultured the "brain tissue" used for this purpose, so the Spiderbots are just as smart (wily might be a better word) as their alien counterparts.  This organic intelligence along with the incredible dexterity of their 8 limbs allows a Spiderbot to be used for many purposes, from maintenance and repair of other robots to scouting missions.  The sensory apparatus loaded into the small frame (8" body, 1' legspan) of these robots are incredibly sensitive, picking up minute vibrations and seeing far beyond the spectrum of light visible to humans.  Laser sighting built into the raised "abdomen" of the Spiderbots enable them to assist other military robots in targeting intruders, but the Spiderbots have no real weaponry of their own (besides miniscule torches, blades and screwdrivers built into their legs and used in maintenance and repair work).  Spiderbots can move at full speed on any surface (including ceilings).