Disclaimer:  I do not own the rights to any of the images associated with these guns!  I pulled these pictures off of Google image search and my posting of them is not meant in any way as a challenge to the rightful owners of these images.


The Guns
(These are listed here by the names the party has given them, not their military designation.
Hence the "Rambo Gun"): 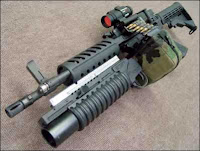 Corner Shot Grenade Launcher:  Barrel can be swiveled up to 90 degrees to allow fire around corners. Laser sighting and computer targeting grant +2 to hit, +4 when using programmable timed explosive detonation via attached computer screen.  This means that this weapon can target someone behind cover by detonating the grenade when it is flying over them.  range of 600’, 200-400’ gets +2 to hit, 400-600’ gets no pluses to hit.  Explodes for 10d6 damage, 15’ radius burst.  Must be reloaded after firing, reloading takes a movement action.

Laser Sniper Rifle:  Range up to 10,000 feet.  Advanced laser targeting scope with gyroscope stabilizers and locking tracking gives +4 to hit, no range penalties. Can fire up to 25 times on a single powercell. Single shot per round.  Damage: 6d10

Heavy Machine Gun:  Effective range to 3,000 feet (longer range possible at severe penalties).  May be fired in semi-automatic bursts of 3 shots per round (at close ranges of 70’ and closer this gets +1 to hit) or fully automatic for 6 shots per round (you do not get a bonus to hit for close range firing while using the fully automatic mode).  Ammo belts come in boxes that are easily exchanged as a move action, each box containing 90 rounds (15 full rounds of fully auto fire).  Each shot does 2d10 damage (for a max of 12d10 if all 6 fully auto shots hit!).  This is not a weapon designed to be held by hand while firing, but particularly large or strong mutants might be able to do so (Bozko the giant mutated nettle plant has fired one of these bad boys by hand, but he stands 14' tall. Don't try this at home, kids!). 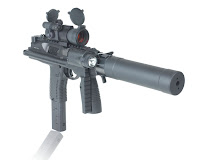 Silenced submachine gun (handheld Uzi style).  These guns have laser sighting and a powerful flashlight.  Either semi-auto fire for 2 attacks at +2 to hit from laser sight or fully automatic fire, 3 attacks with no plus to hit.  They fire hollow-tipped bullets for maximum damage, but this reduces effective range to 800’.  At ranges greater than 400’ semi-auto fire gets no pluses to hit and fully auto fire gets -2 to hit.  Each clip holds 21 shots for 7 rounds of fully auto fire.  Damage:1d12+2 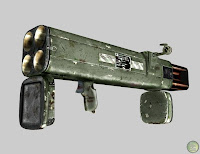 Plasma Rifle:  Range up to 1,000 feet.  Laser sighting gives a +2 to hit.  Two shots per round, 25 shots per energy cell.  The intensity of the plasma burst fired is controlled with a slider on the side of the gun, and can be set anywhere from "stun" to "max".  The intensity slider has seven positions reflecting stun (for 1d4 rounds if save vs. stun attacks is failed), 1d10, 2d10, etc., all the way through 6d10 damage.  The plasma rifles seem to have degraded slightly over time, and occasionally have superheated during use and seemed on the edge of melting down or blowing up.  Until such a time as this actually happens during play, I will not reveal the game mechanic governing the chances of a meltdown.  Unfortunately for the players, this is the weapon that they ended up with the most of.  They looted several bagfuls of these things from a large combat training chamber. 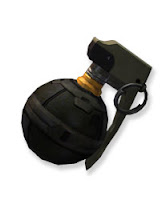 Fragmentation Grenade:  Hand thrown, 15’ radius explosion, 10d6 damage.  This is your typical grenade with a pin that you pull out to arm it. 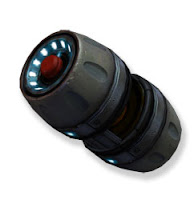 As the players do not know the actual percentage chances of each of these kinds of electronic equipment being disrupted, I will not reveal this on the blog until they spend some time field testing these puppies.

Smoke Grenades:  Hand thrown, 15’ radius irritant smoke screen.  Anyone within the smoke screen takes a cumulative -2 to hit and +2 to AC penalty for each round spent in the smoke.  The smoke persists for 2d6+1 rounds, or 1d6 rounds if in a windy or very well ventilated area. 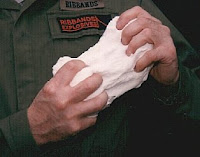 C-4 Plastic Explosive:  A highly explosive compound combined with a plasticizer which renders it around the consistency of modeling clay, C-4 is ideal for improvised explosives because it can be pressed into any available crack, hole or empty shell casing.  It is extremely stable and hard to detonate; you can burn C-4 without detonating it, you can drop it, you can even shoot it without setting it off accidentally!  C-4 requires a detonator which can have a fuse or be remote controlled.  When properly tamped to increase the pressure and explosive force, it does 10d20 damage per pound within a 15' radius and 10d6 damage from 15-30' (save vs. energy attacks for 1/2 damage). 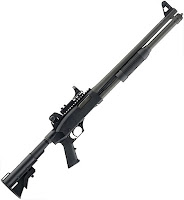 Shotgun:  This is a 12 gauge, pump-action shotgun with a 6 round magazine.  If you put one round in the chamber it can hold 7 rounds.  0-15' range: 3d6 damage, 15-30' range: +2 to hit, 2d6 damage, 30-50' range: +4 to hit, 1d6 damage.  Two shots per round.  A variety of special ammunition exists for these military shotguns, including gas shells (which emit a cone of gas out to 9'), explosive shells, non-lethal rubber buckshot, breaching rounds (which destroy door locks), and screechers (pyrotechnic round that whistles for its entire flight). 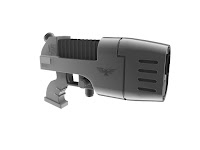 Alien Gun:  5 settings:
1: Energy Beam, 1 mile range (save vs. energy attacks for 1/2 damage at 2000+'), 2 shots per round, 50 shots per energy cell.  Damage: 8d6
2: Flame Thrower, 40' cone, 20' wide at apex, 1 shot per round, 10 shots per fuel cartridge.  Damage: 8d6
3: Worm Dart - a glass dart containing a ravenous alien worm, 4 per clip.  1d6 damage + worm attacks with +1 to hit per point of damage done by the dart.  If the worm hits, it burrows under the flesh - this takes 1 full round, so the victim gets one chance to destroy it before it dissapears.  Worm: AC: 6, 2 HD (10 HP), 1 Attack (bite): 1d6 damage, when it has done 10 damage it splits into two 10 HP worms with identical stats (which can also split).
4: Homing Dart - a barbed dart with a homing beacon in the tip, 10 per clip. 1 damage, but removing it causes 2d6 damage and there is a 10% chance per point of damage done that the tip breaks off in the wound, requiring another 1d6 damage be done to dig it out.  While the dart is embedded in a target, all wielders of Alien Guns receive a +4 to hit the target.
5: Alien Web - a ball of tissue that expands into a 10' web when it strikes a target, which contracts and snares the object it hit in an extremely strong mesh of alien muscle fiber.  4 per clip.  Target must roll under its dexterity with a +4 penalty to the roll or both arms are pinned - if the check is successful, at least one arm is free.  The web is AC: 5 and takes 30 HP of damage to destroy.
Posted by Unknown at 9:41 PM