This motley assortment of robots was encountered by my PCs in the alien spaceship that turned out to be nearly filled with a powerful plant organism.  The robots, designed by the plant organism and created using the ship's science labs, tended to a small forest of young flowering bodies (small Death's Head Trees, with little severed heads as fruit).   The sketches are lifted out of my notes from running the game, and are pretty hasty to say the least.

All of these robots can be controlled by little flying balls called "Sensor Balls", one of which is depicted flying over robot 2 below.  These little flyers usually take no actions beyond hovering in a position that gives them a good field of view (and they can see in all directions and spectrums) and directing the other robots. They will take evasive maneuvers if necessary and can use a short range laser meant for precision trimming and pruning work in combat as a last resort.  As long as any one Sensor Ball is in the vicinity, it commands the other kinds of robots with great intelligence.  Left to their own devices, the robots can only respond with pre-programmed aggressions to anyone disrupting their routine.

Movement: Flight (35 MPH), instant acceleration, perfect maneuvering including the ability to hover
HP: 12
AC: 1
Attack:  2' Laser Beam, attacks as a 14 HD monster (these little balls have amazing processing power and when they combine it with their terrific sensory inputs they can attack with cold precision), 4d6 damage, can cut through metal slowly.

Forcefield: 20 HP per round (the Sensor Ball ignores the first twenty damage it takes every round, this refreshes at the beginning of the Sensor Ball's next turn).
Each Sensor Ball has 6 "eyes" that have 2 HP each; one eye is lost for every 2 damage the ball takes. 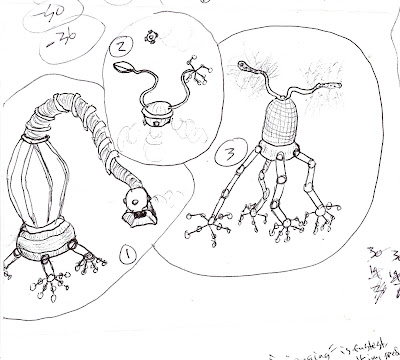 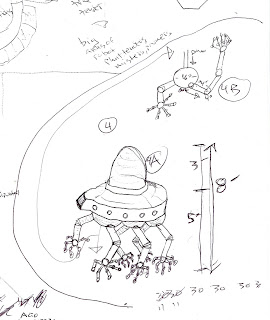 All the robots below share at least one common design element: the ball shaped "fingertip" at the end of each "finger" and "toe".  Each of these balls is covered with a multitude of tiny manipulators that can fold upon themselves to create attraction much like a gecko's foot.  These fingertip balls are capable of firmly grasping almost any surface, and when five of them on the ends of opposable fingers are combined, these robots are extremely nimble and dexterous when it comes to fine manipulation of objects.  This feature means that all robots that possess it can walk on walls and ceilings just as easily as the floor.  Use this to your advantage!  PCs often forget to look up...


The numbers refer to the numbers next to the robots on the drawings above.

Robot 1:  This is a mobile vacuum cleaner, essentially.  It stands four feet off the ground with a neck that can extend out to ten feet.

Movement:  This thing cannot go faster than a slow jogging pace, and its normal movement speed is a slow walking pace as it snuffles up debris and keeps the plant chambers clean.
Attacks: As an 8 HD monster, it can attack with its powerful suction hose to a range of 15'.  This attack causes no damage but holds objects weighing less than 2,000 lbs firmly suctioned against the hose mouth as if it had a strength of 20.  It can carry 500 pounds and drag up to 2,000 pounds at half its normal speed.
HP and AC:
Main Body (the vacuum bag, which can expand out more than twice as wide as the robot is tall, and the disc shaped power source and legs): HP: 100, AC: 5

Disabling the body destroys the robot; disabling the neck or vacuum eliminates its only effective means of defending itself.

Robot 2:  This is a flying plant trimmer.  The main body is 14" across and each arm is a smooth plastic that can extend out to 3 feet.  It has a hand that can gently manipulate a plant and a wicked pruner that can slice straight through a ten inch tree trunk if the blades are fully extended.

Robot 3:  This is a robot plant mister and fertilizer and insecticide dispenser.  Your general all in one watering can swiss army knife type robot.  It can stand anywhere from 2 feet (the height of its reservoir tank and power disc) to over 7' tall when all five segments are extended on each leg.
Movement: as a human
Attacks: The robot attacks as a 8 HD monster. See spray attacks below.
HP and AC:
Reservoir Tank: unless otherwise specified, all attacks are directed at this area.  HP: 60  AC:4 - if the Reservoir Tank is destroyed, the pressurized gases inside explode for 5d6 damage in a 10' radius.
Legs (4):  Each leg has HP:20 and AC:3  At least two legs are required for the robot to effectively move, although it can certainly drag and hop along on one leg.
Misters (2) Each mister has HP:10 and AC:4.  At least one mister is required to for the robot to make a spray attack.

Spray Attacks: 2 sprays (15' range, single target each) or one area attack spray that automatically hits any opponent within 6' (or close melee range).

Damage: (many different sprays) 2d6 acid (ongoing 1d6 damage for two rounds unless washed off), or save vs. poison for 5d6 damage (poison gas lingers in the same area for another round, anyone still in the area a turn later must save again if they have not taken any damage), or save vs. poison or fall unconscious for 1d4 rounds or no damage (special): smoke cloud, limits visibility to 5'

Robot 4:  This is a mobile plant nursery capable of transporting up to a 3' tall baby Death's Head Tree (or your choice of other valuable plant type thing).  It is a beefy robot designed to be able to traverse rugged environments.  It also can act as a controller for the other robots, although it is not as intelligent as several Sensor Balls acting in concert.

The section of the drawing above labelled "4B" shows how each large metal sphere that independently powers two of the robots legs can descend downwards on a pole up to 15'.  If any one of these three two-legged balls survives, it can maneuver the robot around at full speed if not full agility.  4B also shows how each leg can itself extend out to a total of five jointed segments (only two are pictured extended in the main drawing, and none of the three balls that mount the six legs are pictured extended down at all).

The five circles that appear around the edge of the main disc like body of the robot are portals through which eye-tentacles can emerge.  There are ten of these eye tentacles in total.  The very front of the robot is a multi-purpose panel that can serve as a monitor for displaying images and also functions as a forward facing viewpoint.

Movement:  Can run up to 50 MPH over even terrain, and up to 30 MPH over broken terrain and even up a cliff.  These are extremely powerful and rugged robots.
HP and AC:
Everything but the dome (the main body, the extendable balls and the legs): HP: 150  AC: 0
The Dome: HP: 50  AC: 0

Forcefield: The dome is surrounded by a 50 HP forcefield (the dome ignores the first 50 HP of damage it receives each round).
Attacks: as a 20 HD monster: 2 kicks for 4d6 damage each.  If a kick does more than 12 damage, it knocks the victim backwards 10' and requires a dexterity check to remain standing.

Destroying the main body of the robot does not disable the forcefield around the dome or make it any easier to penetrate the incredibly hard clear plastic surface of the dome.  The interior of the dome will maintain a livable environment for its plant for up to 7 days after the robot is destroyed with the tanks of compressed gases and stores of water and nutrients inside the dome.
Posted by Unknown at 1:37 AM 9 comments: