Look out Mutant Past!

Tonight's Mutant Future session, something a long time coming finally happened; a character with the Plane Shift mutation finally used it!  The text of this mutation states that "This mutation grants the power to visit realities in other dimensions... The mutant can only choose to open doors to worlds he has visited before. Otherwise, the doorway leads to a random world of the ML’s choice and design."  I have had a fun plan ready for this since the very beginning of the campaign, because one of the starting characters had the mutation.  Of course, he was only able to attend a few sessions and never ended up using the ability.  But with the deadly sessions of the last few weeks, we had several new characters and two of them have this ability!

My plan was that the first time someone used the Plane Shift ability, it would open a gateway to an alternate past in the same physical location on earth that the portal was opened.  The gate would lead to today's date in the present (the real present, Monday, January 11th 2010).  I figured that the only time the group would want to hop through a portal to a random destination was when they were running from something truly horrid and had no other chance to survive; I envisioned a group of wounded mutants suddenly appearing on Eugene's streets, and thought it would make a fun diversion for the week they were stranded in the Mutant Past before the ability could be used again.

As often happens in RPGs, the way things went down was far from how I had planned it.  After a lengthy meeting with the Mice of the Round Table, where King Arthur and his knights promised to assist in a campaign against Julius Corple and the Knights of Genetic Purity and Merlin told the interested members of the party that he would get a list of materials needed for the robot manufacturing plant to create powered armor for the characters, the party decided that the most pressing threat was Julius Corple.  This decision was aided by two things; the mice had just been invaded by Corple's dog boys and terminator bots, and Dataan's player was not in attendance (he has a serious grudge against the Knights of Genetic Purity and probably would have lobbied hard to make them the top priority).

The group piled into the jeep (all except Natas and his melted face, who rode on the back of Samantha, or "Stang" as she is nicknamed, a 22' long giant mutant wasp who is new to the party) and rolled over to the military complex.  They investigated the building where the formerly aggressive war chimps appeared to be holed up, and discovered that most of their number had succumbed to the FDF7 virus.  The mutated survivors were tending to the diseased and dying, and were patrolling the perimeter of the building as if they expected an imminent attack.  Blue, another new party member, has a special sense that allows him to smell emotional states by the pheromones that are emitted by a body in different mood which he used to detect that they were afraid of something.  He is also a precog, and used this ability to imagine himself hopping (he is a mutant kangaroo) into the building unarmed and attempting to parlay with them.  When he foresaw that they would not react violently, he did this in real time and discovered that their will had been largely broken by the devestating virus and a mysterious creature that had emerged from the military complex and had been slaughtering them one by one.  Now that the rest of the survivors and diseased members of the war chimps had clustered in this one building, the creature had been unable to pick off any more of them, but they were too terrified to leave.  Blue also learned that several of the first war chimps to survive the virus and gain mutations had cracked under the strain of the transformation and had fled off into the swamp never to be seen again.

Blue offered the party's assistance in killing the creature, recognizing that the war chimps could make valuable allies.  He picked their brains for as much information regarding the killer creature as they could give him, then got their permission to invite the rest of the party in.  The war chimps parted with some weaponry to assist the party (good thing to, because the group was out of grenades!  Lard Jeebus knows they love blowing stuff up, so I am sure the ten grenades and the couple of missile launchers that they got will get put to good use) and then sent them on their way with sincere wishes of good luck in their endeavor.  The war chimps had revealed that the creature had an iron will and had proven almost impossible to effect with mental mutations.  It moved with incredible speed and could leap a hundred feet in a single bound.  One of its arms ended in a deadly metal claw, and a tentacle-tongue emerged from this and entered the wound made by the claw to suck out the insides of its victim.  Its other arm was a long tentacle that it used to grapple its opponents.  An energy cannon mounted on its tentacle arm and poisoned quills that covered its head rounded out its formidable arsenal.

The creature only emerged from the complex at night, so the party hoped that by searching for it in the complex during daylight hours they might catch it napping.  Stang shuttled everyone up to the roof, and just as they were discussing strategy and how to best go about finding the beast, it burst through the roof and hurtled itself at Stang (who has the Prey Scent mutation which draws predators to her like sharks to blood in the water).  The following fight was brutal, and several party members (including Stang) were reduced to single digit HP in the first couple of rounds.  Only some lucky shots with the guns looted from the Dog Boys using the alien web ammunition kept it from completely annihilating the entire group.

This is what they were up against:  The 16' tall Xiticix Killer from the Rifts Lone Star World Book. 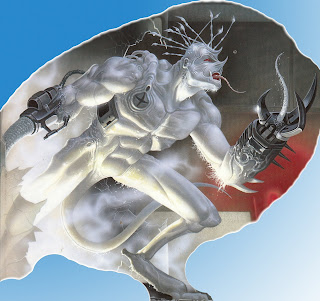 A few rounds in to the combat, the monstrosity had shredded the rest of the party's alien web ammo like so many spiderwebs and was about to commence with the devouring of the party from the inside out with its claw and tentacle-tongue.  Desperate, one member of the group emerged from behind the air vent where he had been hiding and knelt directly behind the killer, enlarging himself so that he came up to its knees.  Rok used his Plane Shift ability to open a gate directly behind the kneeling party member, and the rest of the group rushed the creature and pushed it over the kneeling party member and into the gate.  As it tumbled in, I told the party that they could see through the gate to what appeared to be the same location, but the rooftop was not in the middle of a swamp, instead being surrounded by dry ground, paved roads, cars driving and generally not a ruined post-apocalyptic landscape.  The beast attempted to drag Rok through the portal with it, but he managed to shut the portal on it, severing its tentacle and trapping the beast in an alternate reality.

Everyone realized that they had just unleashed a terrible killer into the present/Mutant Past.  A debate ensued as to whether or not the portal led to the actual past of the timeline that they presently inhabited, or if it led to an alternate past.  Some party members felt like they might have unwittingly caused the apocalypse that led to the Mutant Future and the world they knew today!  Blue used his precog ability to imagine Du Pont (the other mutant with the Plane Shift ability) opening up a portal to the same place (I ruled that now that Rok and Du Pont had seen through the portal, they could reliably open up a portal to that particular reality if they so desired) and himself looking through it.  He saw a scene of devastation, cars wrecked on the road and people fleeing as the creature slaughtered everyone within reach.
Posted by Unknown at 1:05 AM