A lot has happened since my last session recap.  Lets see, for starters, how about four character deaths, one character kidnapping, the campaign wiki getting up and running and the NEAR TOTAL ANNIHILATION of the local chapter of the Knights of Genetic Purity at the hands of my wicked awesome players!  Too much has happened to allow me to recap everything, so let me hit a few highlights.

After sending the tentacle armed monster back to the Mutant Past, the party poked around the top of the military complex and realized that the monster had left behind dozens of babies, gestating in sacks of entrails and insides that the monster had sucked out of its victims with its tongue-arm.  They set about destroying these, and the embryos inside starting screaming, drawing the attention of some adolescent tentacle monsters.  The ensuing fight also drew the attention of some huge worms that apparently have taken up quarters in the second level down (a lot has changed in the complex since Julius Corple has been in charge...). 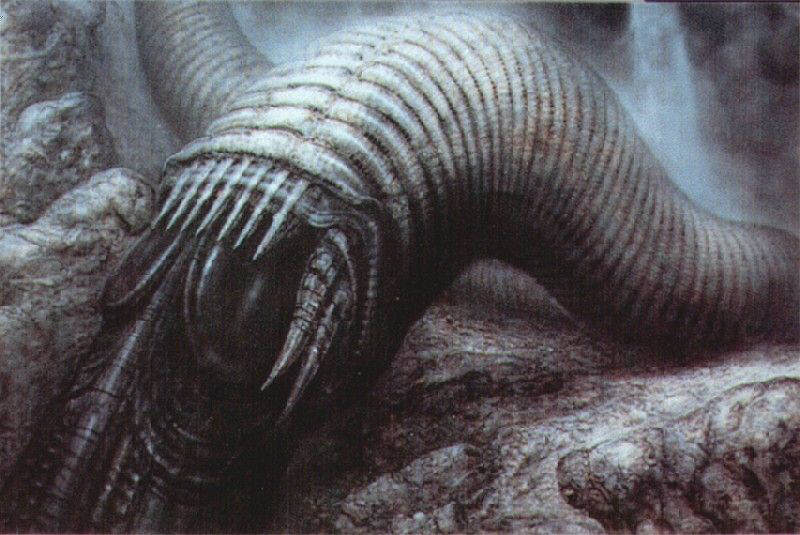 Blue the Kangaroo was unconscious for much of this fight as a result of dying in a vision of the future he had while using his Precognition mutation.  He woke up just in time to see a bunch of Dog Boys coming across the swamp, and rather than running like a sensible Kangaroo he used his ability to see into the future to see what the dog boys were going to do.  He didn't like what he saw, tried to run when it was too late and got netted by the Dog Boys, who hauled him off into the swamp despite the best efforts of his comrades to save him whilst simultaneously fighting off junior tentacle monsters and 300' worms.

Yeah, that was a pretty epic combat.  One of the great moments involved Stang (an angry 30' long mutant wasp with 4 extra brains, 3 of them defective, that have the personalities of the Beatles and occasionally attempt to possess her) and one of the worms.  Stang, flush with the hundreds of temporary HP she had gained from using her Vampiric Field mutation to destroy dozens of monster embryos, swooped down at a worm that had just crashed through the roof from below.  She was promptly swallowed whole but blasted her way out from the inside, emerging relatively unscathed despite taking 5d20 acid damage a round!

After things quieted down, the party learned that Skinny Butt (their home base) had been obliterated.  The Knights of Genetic Purity had managed to form an alliance with the Radiant Order of the Oh and had successfully trapped the Secret Order of the Ooh in the underground portions of the Ooh-Oh Monk's neck of the woods. This meant that the Knights now had access to the missile silo the monks had formerly used to fend off all comers, and the (huge, bunker-busting) conventional explosives packed into the missiles had been used to pound Skinny Butt until it was a hole in the ground.

Reasoning that if they helped the Secret Order of the Ooh escape they would have yet another ally against the Knights, the party contacted his magnificence the Dean Doco Proffus Flipsham Egwar using the special ear piece he had given them in an earlier meeting.  They were perturbed to find out that something or someone was preventing the powerful mutant from using his mental abilities to teleport in his shining egg vehicle, and indeed, was preventing all of the mutants in the order from using their mutations to fight their way out.  The party resolved to clear a path up from the mouse kingdom through the abandoned levels that were frequented by Dragons (giant, winged, scaly, fire-breathing cats) and an assortment of carnivorous plants so that the Secret Order of the Oohs could escape down without having to fight their way out.

This turned out to be a bad idea, as the party ignored all my (very clear, I thought) warnings that the dragons were nothing to be trifled with - Ryan had just rolled up a new character to replace the recently abducted Blue, coming up with an Obese Were-Panda in a business suit, and this unfortunate mutant died within a half hour of his creation.  Natas, who had recently acquired the Increased Caloric Needs defective mutation, carved up the roasted (courtesy of the dragons) body of the panda to eat later on.

The party then tried a different strategy, returning to the surface and making a direct assault on the missile silo with the help of some of the Mice in Mech Suits.

The battle was ferocious and bloody, and when a chainsaw wielding robot of doom joined the fray on the side of the Knights of Genetic Purity, it looked like the party was facing another inglorious defeat.  Thats when George (a new character played by Mike) floored his ATV at the robot and used his Disentegration mutation, rolling a success to disentegrate 140 pounds of its head and shoulders.  As it teetered and then fell over, decapitated, it became apparent that there had been a man inside it - blood began to pour out and George collapsed unconscious on his ATV, drained by his mutation, and rolled off into the woods.

The Robot of Doom: 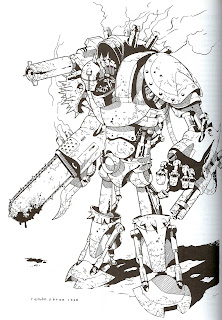 The tide of the battle turned at this point, and when it became clear that the party and their allies were going to win through into the silo, the two silo coverings opened up and the knights inside began preparations to launch two missiles simultaneously on Lard Jeebus knows what target.  Dataan and Bozko saw this, and both took actions to prevent the missile launches.  Bozko in his Iron Man suit flew by and loosed a mini-missile into one silo while Dataan ran down the hillside from where he had been hiding after nearly being killed in the first moments of the combat and began chucking grenades into the other silo.  They both managed to ignite the booster fuel in the lower stages of the missiles, and as the silos were consumed with a fiery explosion, one of the warheads was detonated in the conflagration.

Most of the party had cleared out as soon as the impending missile launch had been discovered, Rock hauling away the unconscious George and Bozko flying off after loosing his missile.  Bark had already been slain in the melee, and Natas was inexplicably carving holes in a helmet he had pilfered from a KoGP commando so that he could put the helmet on over his horns.

When the missile exploded, Dataan and Natas died instantly and several more missiles stowed below in the silo also exploded, collapsing the entire complex and leaving a smoldering crater in the side of Hendrix Hill.  I should mention that I gave Natas plenty of opportunity to say he was fleeing the scene (Dataan unfortunately was right next to the silo, having just tossed the grenades in that caused the missile to detonate) - but he was very clear that he was stopping to pick up a helmet and cut holes in it for his horns to fit through.  Rock's player (the older brother of Natas' player in real life) said, "You mean you are doing that after you run away, right?"

But Natas again reiterated that he was picking up a helmet and carving holes in it.  So that is how he died, in the middle of a crafting project!

Still, this had to be counted as a glorious success for the party despite three character deaths - in the battle and subsequent missile detonations, 50 regular Knights of Genetic Purity, 16 commandos, 1 special operative wearing an Iron Man suit and one chain-saw wielding Robot of Doom had been destroyed, representing nearly the entire force that the knights had in the area.  Some of the top ranking officers and one special operative in an Iron Man suit escaped in a vehicle, but other than that, it was a clean sweep.
Posted by Unknown at 12:07 AM