My last post about destructible armor and damage reduction has gotten me thinking about powered armor.

I want to extend these rules to this fertile ground, but with more options than a simple loss in base AC bonus when soaking up damage into a suit.  My initial thoughts were to divide a suit up into sub-systems:  AC Bonus; propulsion (if any); weapons; defense (if any); carrying capacity/strength. 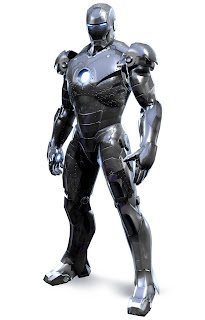 For example, the Iron Man suit in my campaign has a base AC bonus of +8 (AC of 1); repulsor tech propulsion enables flight up to 1200 MPH (James, the player in my campaign who controls the iron man suit, may pop in here and correct me on that, I don't have my notes in front of me and I can't actually remember top flight speed right now...); 2 x Repulsor Beam attacks per round for 4d6 damage, or a Repulsor Beam cone, +4 to hit against all targets in a 50' long 15' wide cone, doing 2d6 damage to those hit, or a mini-missile at +4 to hit with targeting computer lock, doing 7d6 damage in a 15' blast radius; 50 HP per round force field; 2 ton lifting capacity/1 ton carrying capacity in flight.

If damage was soaked into the suit, I would roll 1d5 (d10 / 2) and go down the line of sub-systems to see what got messed up.  I would rule that you could soak the entire damage of an attack by suffering damage to a random subsystem.  I would probably base the severity of the damage on the total HP being soaked, so absorbing a 127 HP explosion would definitely completely destroy whatever sub-system was rolled.

Like armor, powered armor can be repaired.  This requires a successful tech roll and some raw materials (wiring, circuit boards, pipes, metal sheets, blow torch, etc.).  A sub-system can only ever be restored to half functionality; in the Iron Man suit example, if the weapons sub-system had been completely destroyed, I might rule that the mini-missile launcher was a total loss but the repulsors could be restored with some hard work; if flight capability was lost, it could be restored, but only up to 600 MPH max speed and at greatly reduced maneuverabilities.

I am kind of excited about this.  I have been thinking about how to make my Mutant Future game a little more Mad Max in flavor, and the scavenging and scrounging of weapons and armor and robotics is going to go a long way towards achieving that.  More so, I look forward to seeing what kind of Frankenstein creations my players come up with after a while of adding on random junk to their rapidly disintegrating mech suits.
Posted by Unknown at 11:04 PM