In the real world I run two RPG campaigns simultaneously, am the general manager of a local natural grocery store with 40 employees, try to be a good husband to a beautiful goodwife, and keep up a busy musical and social life.  I am good at juggling things.  I see connections everywhere, ways of integrating different aspects of my life to achieve new heights at every endeavor.  It is only natural, then, that my two RPG campaigns should coexist in a single coherent worldview and could even, if the conditions were right, directly impact each other. 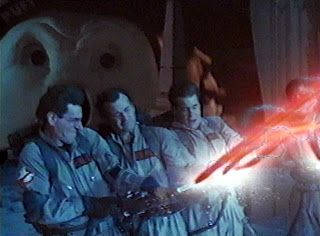 Well, the moon was in the correct phase, the planets aligned, the stars froze for 73 milliseconds and a transmission escaped from one of my campaigns into another.  A player, looking bravely into the face of the unknown in the form of a direct nervous system interface with an alien computer system, facilitated by the animated liquid-metal quadrapus-harness robot that had attached itself to him, said the following immortal words:

The DM pauses and thinks back on what he had just heard.

DM CARL:  "The only thing you can understand about this interface is that there are certain 'programs', or complex sequences of energy pulses in various frequencies, that can be activated by the central singularity container.  You have no way of telling what the effects are going to be.  The only way you can even tell that these are 'programs', is that one was recently activated by the liquid metal centipede that you guys destroyed last time.  That program activation is what provided the energy for all the compartmentalized charged gas brains, started the alien egg bath glowing pink and restored the dead embryos to a rapidly growing life.  So when I said that basically you had a bunch of switches, that you could flip on or off, I was trying to stress that you had no idea what flipping the switches would do.  Are you SURE you want to flip some switches?"

(I at least remember the gist of the chart, which is that an 85 or higher is a result observable within the chamber, 1-84 is an activation of one alien facility or another on the planet, or the activation of a certain subroutine in an alien robot, and a roll of 100 on a d100 was the total, immediate and utter destruction of the universe with no savings throw.  Thats what you get for fucking with a goddamn singularity contained inside alien technology that you don't even pretend to understand.)

DM CARL:  "OK... I can't find the chart, but go ahead and roll 4 times.  That is how many 'levers' you can flip in one round of actions.  I will record the results.  I remember enough about the chart to tell you the general results, if you can see any at all, of your actions.  You can roll 1d100 four times if you really want to."

TILANDRIEL:  shake shake shake  ROLLLLLLLLL   86  (oooohhhhhhhhhh...... I will go with one of the results that I remember well because it is a really bad one, but it is easily observable in the chamber)

DM CARL:  "The complex pink and purple pulses that have covered the central singularity container stop and a dull orange glow replaces them.  Everyone with a magical quirk (see my Fantasy Quirks supplement for Mutant Future) can sense a sudden and strong influx of magical energy.  Go ahead and roll three more times."

SHAKE SHAKE SHAKE ROLLLLLLL -----  the last three rolls were under 85, no 100's, the world did not end, and three of the four levers caused effects that the party could not observe.  Still, the party DID have one observable effect to contend with back on Celestia.

DM CARL:  "No longer is the singularity container simply broadcasting energy out across Celestia; now, several intense streams of magical energy seem to be manifesting and streaming INTO the singularity, which swells and grows as the orange glow becomes more intense.  At the same time, the plasma brain baths are instantly shut down and you lose your interface.  You no longer have any contact with the alien computer or the singularity container."

The Upshot:  The streams have been crossed!

The players have already suspected that the alien technology they are encountering on the surface of Celestia is related to the "snake men" that reside in an obsidean crater in a city of gold in my 4e campaign.  These suspicions will probably be confirmed next Friday when my 4e game next meets, as there will be noticeable impacts of the levers being thrown in that game world.

The alien facilities that pepper the landscape of Celestia in a peculiar pattern the cause of which the party has not yet determined are not only created by the same race of snakemen that reside mysteriously aloof in their golden city in my 4e campaign, but these facilities are directly linked to the huge meteorite "battery" that the golden city sits on top of.

The players unwittingly activated an energy transference subroutine that was not supposed to be activated until very near the end of time in my Mutant Future universe.  This subroutine begins the transference of stored energy from the snakemen's meteorite battery in my 4e universe to the snake men's singularity container in my Mutant Future universe, for purposes that are still unclear to my players, not to mention the effect that starting the energy transfer billions of years too earlier might have on whatever plans the snakemen have laid throughout time and multiple dimensions of reality.

More to be said on that after next Friday's game...
Posted by Unknown at 1:24 AM